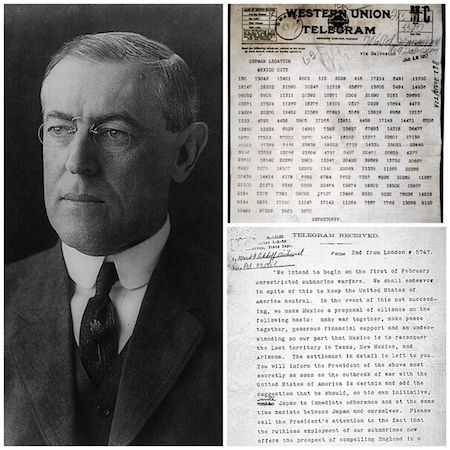 On this day in 1917, Congress declared war on Germany, marking U.S. entrance into a war that had been raging in Europe for more than three years.

In January 1917, German Foreign Secretary Arthur Zimmermann sent a telegram to the Imperial German Minister in Mexico to be delivered to the President of Mexico. The telegram urged the president to start a war with the United States. In return, Germany would help Mexico regain land it had lost to the U.S. in the Mexican-American War, namely, Texas, Arizona, and New Mexico. The message also informed the president that Germany would begin unrestricted submarine warfare on February 1.

President Woodrow Wilson, who ran on campaigns dedicated to keep the U.S. from entering the war, learned of the telegram and its contents from the cryptologists in Room 40 of Royal Naval intelligence and was furious. Following a public outcry, he asked Congress for a declaration of war against Germany on April 2, 1917. Below are some of his words to a joint session of Congress that day:

"With a profound sense of solemn and even tragical character of the step I am taking and of the grave responsibilities which it involves, but in unhesitating obedience to what I deem my constitutional duty, I advise that the Congress declare the recent course of the Imperial German Government to be in fact nothing less than war against the government and people of the United States... That it means to stir up enemies against us at our very doors the intercepted [Zimmermann] note to the German Minister at Mexico City is eloquent evidence."