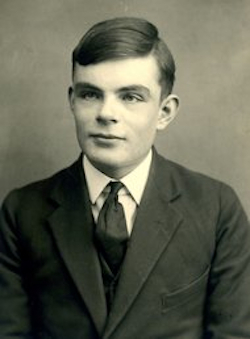 For an extensive look into the life and accomplishments of Alan Turing, you will want to read Dr. Andrew Hodges' book, "Alan Turing: The Enigma." Hodges' book was the inspiration for the highly-acclaimed film, The Imitation Game.

Read a review by Stephen Mize of Dr. Hodges' book.

The following is excerpted from Biography.com:

In his seminal 1936 paper, he proved that there cannot exist any universal algorithmic method of determining truth in mathematics, and that mathematics will always contain undecidable propositions. That paper also introduced the "Turing machine. His papers on the subject are widely acknowledged as the foundation of research in artificial intelligence. The central concept of the modern computer was based on Turing’s paper.

After receiving his Ph.D. from Princeton University in 1938, he returned to Cambridge, and then took a part-time position with the Government Code and Cypher School, a British code-breaking organization. During World War II, Turing was a leading participant in wartime code-breaking, particularly that of German ciphers. He worked at Bletchley Park, the GCCS wartime station, where he made five major advances in the field of cryptanalysis, including specifying the bombe, an electromechanical device used to help decipher German Enigma encrypted signals. Turing’s contributions to the code-breaking process didn’t stop there: He also wrote two papers about mathematical approaches to code-breaking, which became such important assets to the Code and Cypher School (later known as the Government Communications Headquarters) that the GCHQ waited until April 2012 to release them to the National Archives of the United Kingdom.

Turing moved to London in the mid-1940s, and began working for the National Physical Laboratory. Among his most notable contributions while working at the facility, Turing led the design work for the Automatic Computing Engine and ultimately created a groundbreaking blueprint for store-program computers. Turing went on to hold high-ranking positions in the mathematics department and later the computing laboratory at the University of Manchester in the late 1940s. He first addressed the issue of artificial intelligence in his 1950 paper, "Computing machinery and intelligence," and proposed an experiment known as the “Turing Test”—an effort to create an intelligence design standard for the tech industry.

Homosexuality was illegal in the United Kingdom in the early 1950s and so after admitting to police that he had sexual relations with a man, Turing was arrested and was forced to choose between imprisonment or probation with chemical castration. Turing chose probation. He died on 7 June 1954 as a result of cyanide poisoning and many have debated if he committed suicide. Turing posthumously received a formal pardon from Queen Elizabeth II in December 2013 for his conviction in 1952 on charges of homosexuality.

Turing received numerous awards and honors for his various contributions and accomplishments. In 1999, Time magazine named him one of its "100 Most Important People of the 20th century," saying, "The fact remains that everyone who taps at a keyboard, opening a spreadsheet or a word-processing program, is working on an incarnation of a Turing machine."