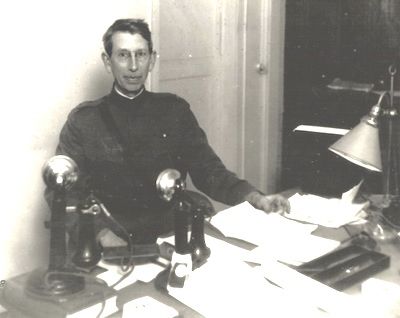 Although Van Deman entered the U.S. Army as a surgeon, he eventually went to work for the Military Information Division (MID). Years later he wrote a history of the MID - including its rise and fall. He was convinced that the Army must have a coordinated intelligence organization if it were to avoid defeat in the near future, especially as it was now obvious that the U.S. would soon be involved in the war in Europe. Eventually Van Deman was able to get an audience with the Secretary of War to present his case. There he convinced the War Department to accept his idea of an intelligence department for U.S. forces.

As the result of these efforts, the Military Intelligence Section, War College Division, War Department General Staff, was created on 3 May 1917, with Van Deman, now a Colonel, at its head. By the war's end in 1919, it had grown to 282 officers and 1,159 civilians, most of them specialists. One of these was Herbert Yardley, a cipher clerk with the State Department who Van Deman made a first lieutenant and put in charge of codes and ciphers. Van Deman modelled his new organization on British Army intelligence, and divided it into several departments.

As well as military intelligence gathering, MID was also tasked with preventing sabotage and subversion by enemy agents or German sympathizers on US soil. Short of manpower, Van Deman relied on private groups which he organized into the American Protective League. He also provided security to government offices, defense plants, seaports, and other sensitive installations. He created a field organization in eight US cities which employed mobilized civilian policemen to perform security investigations. In France, MID provided operational intelligence to the American Expeditionary Force, and Van Deman created the Corps of Intelligence Police (forerunner of the Counter Intelligence Corps), recruiting fifty French-speaking Sergeants with police training. Thus, within a few months, he had created an intelligence organization that could support both domestic and tactical intelligence requirements.