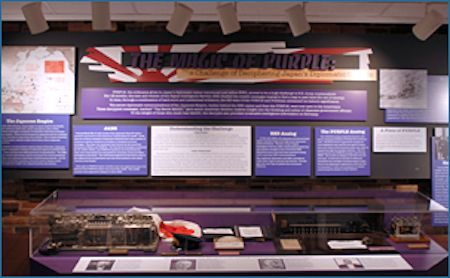 20 March 1938: SIS began receiving messages from Purple - a Japanese Cipher machine. Don't miss the "Magic of Purple" exhibit at the National Cryptologic Museum in Ft. Meade, MD. Visit the link below to learn more about it.

PURPLE was the second of two Japanese diplomatic machine-generated cipher systems broken by the U.S. Signals Intelligence Service (SIS). In 1935, the SIS successfully broke Japan's machine produced RED system. In 1938; however, Japan began using a more complex and challenging system that the SIS referred to as PURPLE. In time, through a combination of hard work and effort, the SIS team met with success. The secret diplomatic communications of the Japanese Empire, hidden behind the PURPLE ciphers, were now open to the Americans. These decrypted messages, marked "Top Secret MAGIC," gave senior American decision makers insight into the thinking and policy of Japanese government officials in the days and months leading up to the attack on Pearl Harbor. However while the information contained in MAGIC gave select US and military leaders insight into future Japanese intentions on a broad level there was no specific information in MAGIC that would have enabled America to predict the attack.