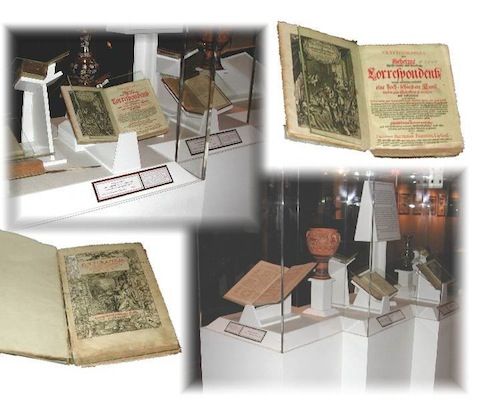 15 December 1562: Death of Johannes Trithemius, author of the oldest book on cryptology, "Polygraphaie." He began writing the book in 1508, but it was not published until 1518. In fact, Trithemius wrote several books and finished them quickly, but they were not published until after his death. This photo is of the Museum's rare book exhibit, which includes a copy of "Polygraphaie." Click to learn about the NCMF's acquisition of a publication by Trithemius from Dr. David Kahn.

The major works of Trithemius include "Steganographia," (which means in Greek, "hidden writing") written circa 1499, "Polygraphiae," a cryptographic work, and "De Septum Secundeis," a history of the World based on astrology.