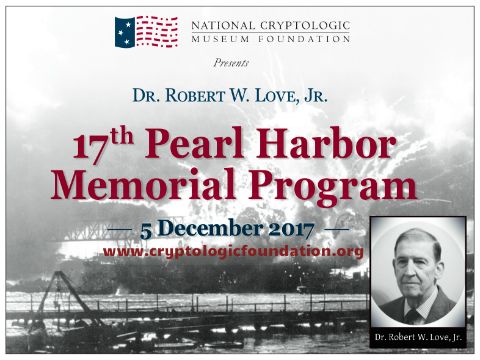 The 2017 NCMF Annual Pearl Harbor Memorial Program featured special guest speaker Dr. Robert W. Love, Jr. In years past, our series has covered many aspects of the attack ranging from the attack itself, and its immediate aftermath in the Pacific, to diplomatic, economic, and political factors leading up to the attack.

This year our focus was on the rationale for the attack, which even its architect, Admiral Yamamoto, characterized in so many words as a “death warrant.” Dr. Robert Love, a professor and historian at the U.S. Naval Academy, helped us to understand the motives and goals of the planners and whether it was “a bold stroke or senseless strategy.”

Dr. Love teaches recent military and naval history at the Naval Academy and is the author of the two-volume "History of the U.S. Navy," as well as scholarly articles on American and British naval history and diplomacy. He is also the co-author/editor of "The Year of D-Day," "Pearl Harbor Revisited," and "The Chiefs of Naval Operations."