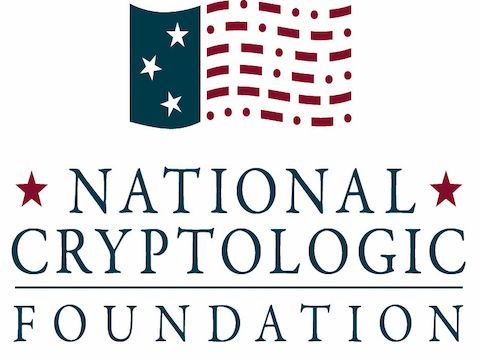 While many people may wonder what the dots and dashes in our logo represent, others will immediately recognize them as Morse code. Although the code in our logo lacks the exact amount of space generally inserted by Morse code operators between letters (equivalent of 3 dots), it is still very easy to uncover our intended message.

The breakout of the Morse code in our logo is as follows:

As you can see, dots and dashes in our logo spells out CRYPTOLOGIC.

Throughout our website you will notice additional examples of Morse code used as make-shift dividers or other page design elements. These examples either spell out Cryptology, NCMF or NCMF/NCM.

The field of solid color and three stars symbolize the past, present and future of cryptology as well as the three points of the mission; Educate, Stimulate, and Commemorate. The flag represents patriotism and the implied movement in the design implies progressiveness.

The original logo of the National Cryptologic Museum (NCM) used the same flag (see below). However, the Museum has since changed their logo.